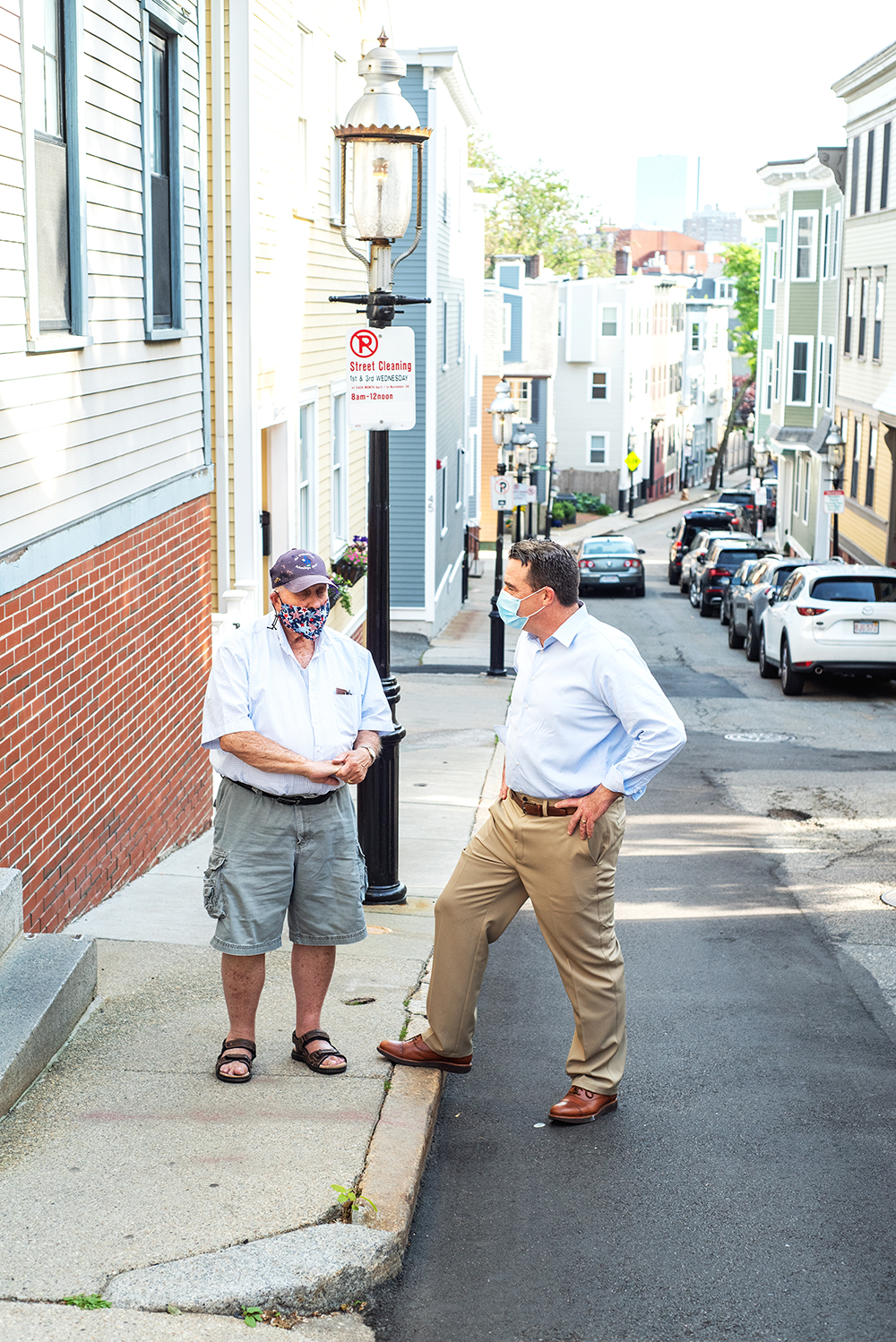 Dan Ryan has walked the picket line with the men and women of labor in numerous strikes and actions.

Dan’s experience as a Legislative Aide is Washington, DC has helped him some labor policy here in Boston.

Dan’s father and three uncles were members of Boston Firefighters, Local 718. Out of high school, Ryan himself was a member of Teamsters, Local 122 before getting laid off in the recession of the early 1990’s. At that point, he took a job as Teen Center Director with the Charlestown Boys and Girls Club, helping to steer young men and women on positive career paths through the Broader Horizons College and Career readiness program.

Dan and his wife Kara are active Boston Public School parents. Their daughters Ella and Audrey are heading into 7th and 5th grade. Like other families, they are currently homeschooling due to COVID-19. Their son Myer, a public school graduate, is home from graduate school. Dan and Kara both attended Massachusetts State Universities.

Ryan requested and received a $1M increase to the Department of Elementary and Secondary Education (DESE) FY’20 budget line item for the Early Course to College program. This program is an introductory program that allows high school students to obtain college credits while still in high school. Many Chelsea High, Charlestown High and Phoenix Academy Charter students use this program to gain college credits.

Ryan’s imprint is on the landmark Student Opportunity Act, passed into law overwhelmingly last year. Some of the issues he championed in previous sessions, while the bill was at an impasse, were included. For example, Ryan has asked for and received increases in charter school reimbursements back to cities and towns for their school districts in past budgets. He continued to advocate for full charter reimbursement as an item that all sides of the Charter divide could agree upon. 100% reimbursement, phased in, was included in the final bill. Ryan was also successful in adding money into what became known as the ‘pothole’, a line item in previous budgets that would reimburse Gateway Communities, such as Chelsea, for money lost to changes to the federal school lunch program under the old formula. Many of the provisions in the new bill addressed the inadequate funding for Gateway Communities.

Ryan has been working on Veterans issues and casework at the federal and state level for over twenty years. His dad, four uncles and maternal grandfather were World War II veterans. His grandmother, Melinda, was a Gold Star Mother and an active member of their organization. Daniel Joseph Ryan is named after his uncles Daniel and Joe, the former a resident of the Chelsea Soldier’s Home when he passed two months before Ryan was born, having never fully recovered from injuries sustained in the Pacific Theater in WWII. The latter was killed in action following the invasion of Normandy and is buried in France.

The Chelsea Soldiers’ Home is undertaking a $300 Million build out of a State-of-the-Art long-term care facility. This facility when complete will give our men and women who served in uniform the dignified modern facility they deserve. This development was made possible through State funding with federal reimbursement, approved while Ryan served on the Veteran’s Committee.

Ryan served on the Veteran’s and Federal Affairs Committee when several iterations of the Brave Act were passed. These bills and others have collectively protected and expanded benefits earned by our beloved service members.

Although not a veteran himself, Ryan is a guest member of the Sons of the American Legion, through his activities in the Jim Conway, Bunker Hill Post 26 in Charlestown. He is also a member of the Abraham Lincoln Post, GAR no.12.

In 2020, as a member of the Transportation Committee, Ryan voted in favor of moving The Family Mobility Act out of committee. This is the first time in the bill’s fifteen-year history that the legislation has been released from committee.

Voted for and supported The Transgender Public Accommodations Act.

In the comprehensive 2018 Opioid Prevention Bill, Ryan was one of the lead legislators in dialogue with colleagues, police chiefs and advocacy groups to expand Crisis Intervention Response training. This is a proven national model of police training that has proven to de-escalate precarious situations to which police officers are often called.

In 2018, Ryan voted in favor of the passage of the Transgender Accommodations Act. He is an original co-sponsor of the Chelsea Pride Flag Raising event at City Hall each June. He also co-sponsored a similar event in Charlestown last year, initiated by City Councilor Lydia Edwards and Attorney General Maura Healey.

Ryan served as Vice-Chair of the Mental Health, Substance Abuse and Recovery when the Criminal Justice Reform Bill of 2018 was past. Eliminating mandatory minimums, expanding drug courts and introducing substance abuse recovery programs in our county jails has led to some of the lowest incarcerations rates in state history.

As Vice Chair of the Mental Health, Substance Abuse Committee, Dan played an important role in the passage of legislation to help address the Opioid Epidemic in our Commonwealth.

Ryan has a strong environmental record. He has co-sponsored most, if not all of the legislative priorities posed by environmental groups each legislative session. He has ranked at, or near the top, in the Environmental League of Massachusetts (ELM) Legislative Scorecards in all three sessions ’s been in office.

As an Urban Representative, Ryan is no stranger to social justice issues. Dan grew-up with Orange Line trains running feet from his bedroom window. He swam in a polluted Boston Harbor before the federal clean-up. He understands the government’s role in rectifying environmental sins of the past.

Ryan worked with MassPort and The Boston Planning and Redevelopment Administration (BPDA) to include in its new lease agreement an authorization, and funding, for a two mile long bike and pedestrian trail along an abandoned railway in the industrial waterfront of Charlestown. Commitments to expand and refurbish portions of the Harbowalk were also included in this agreement.

Ryan advocated for and received a $3 million authorization in the Economic Development Bond Bill for photovoltaic vehicle research to be done in a Massachusetts State University.

Ryan sponsors and receives annual line items for DCR Parks in Chelsea and Charlestown. He has also received line items for climate resiliency and flood mitigation in annual budgets and bond bills.

In his personal life, Ryan has become an avid walker. With the State House being two miles from his house, he walks nearly everyday, expressing to others the mental and physical benefits he enjoys from these daily sojourns. He has also become an avid amateur naturalist admiring the recent re-habitation of the Paul Revere Park by many birds and animals that had disappeared from this area years ago. On one walk, he called the DCR Government Relations team to have a harbor seal freed from the locks it got trapped in chasing herring up the Charles. He captured this environmental victory on Twitter. Dan, his wife Kara, and three children hike regularly on the trails Greater Boston has to offer. Dan also has a family membership to the Audubon Society